Gay and pleasant Land? -a study about positioning, ageing and gay life in rural South West England and Wales

Gay and Pleasant Land? from Kip Jones on Vimeo.

A work package in the New Dynamics of Ageing Project, "Grey and Pleasant Land?: An Interdisciplinary Exploration of the Connectivity of Older People in Rural Civic Society"

The project is rooted in and continues upon in-depth findings and networks established by a three-year action research project, Gay and Grey in Dorset. The Gay and Grey project investigated the needs, wants, fears and aspirations of older lesbians and gay men. This study's conclusions were that older gays and lesbians feel at risk of isolation in rural areas and that this phenomenon needed further study. Further, the study's participants coming out stories seemed to be a device employed in negotiating social inclusion over the life course.

Learning more about how this is accomplished, and over time, seemed important for further investigation. Gathered narrated biographies will eventually form the basis for the composite characters for a short film, produced by a professional filmmaker in collaboration with the research projects investigators. In addition to the collected biographies, visual ethnographic data will be collected which enriches the location, age range and activities of the research population. This primary data will then be interpreted by citizen panels and developed by them, in collaboration with the filmmaker, into the film's script. The professional level, broadcast quality film itself will be totally grounded in the data—both in the life story interviews and the visual anthropological data gleaned from observation in the study's rural communities.

[See also: "Gay and Grey in the Green British Countryside: What could possibly go wrong?"]
Posted by Kip Jones at 20:15 No comments:

sound picture: fun on a boat


If it won't play above on your pc, use the link below:
sound picture: fun on a boat from Kip Jones on Vimeo.


Through sound and picture, depicting some old people having fun on a tender boat in a rough bay off of St Peter Port Guernsey

How can we 'see' what we hear? How does image increase our desire to hear? Do we always need to see what we hear, or does our imagination fill in the missing picture?
Posted by Kip Jones at 11:42 No comments: 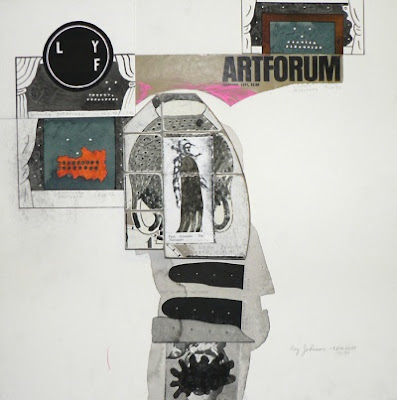 Ray didn't talk about it, he just did it.That's why you don't find art magazines lying around quoting the art philosophy of Ray Johnson. 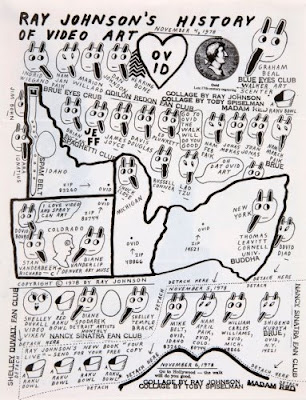 Raven Row’s inaugural exhibition is the first large UK show of the collages and mailings of New York artist Ray Johnson (1927–1995). Johnson used radical means to construct and distribute images, inadvertently inventing the ‘mail art movement’. He made art out of social life – both real and imagined – gathering celebrities, the art world, and friends into his work. His influence on twentieth century art far exceeds the recognition he receives.

‘Ray Johnson. Please Add to & Return’ is significant in representing Johnson’s mailings, objects he regarded as gifts and thus contrary to the market, equally with the collage works he made for gallery exhibition in the sixties and seventies. Also included are the collages he subjected to a seemingly endless process of reworking and overlaying, which were found signed with multiple dates and neatly arranged in his house at the time of his death. 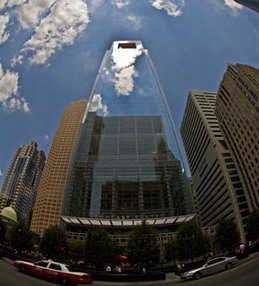 In Comcast Center's lobby is the Comcast Experience which is a 2,000 square feet (190 m2) high-definition LED screen that has become a tourist attraction. Designed to be environmentally friendly, the skyscraper is the tallest Leadership in Energy and Environmental Design (LEED) certified building in the United States.

Please help if you can 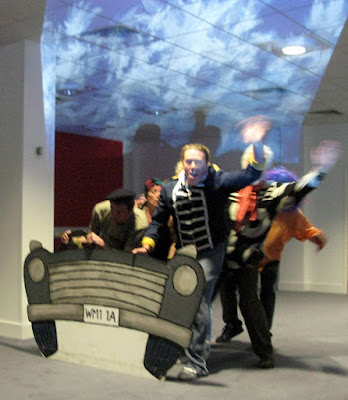 PHOTO: BTE performers recreating a scene from Antonioni's film, Blow-up at our recent "Love-in" for faculty in Health & Social Care and The Media School at Bournemouth University

Bournemouth Theatre in Education is being shut down. Over many years, this tiny team with a national and international reputation has engaged with countless young people, as well as adults.

Please help if you can. Sign the petition to save Bournemouth Theatre in Education!
Posted by Kip Jones at 19:38 No comments: