“No horses were frightened in the making of this motion picture”

Actor Tom Kane, who plays the role of young “Flip” in Rufus Stone, relaxing between takes. 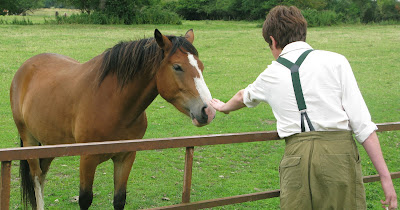 Just to be clear: I’m not a wigs and whistles kind of guy.  That is, I have never fancied a day out at a gay pride parade.  All right for some, but for me the idea of being gay, even celebrating it, is not about being ‘outrageous’ in public for an afternoon and then thinking I have won over some disbelievers or bigots.

With my serious mortarboard on: How does such activity open up dialogue, located in human interactions and their social contexts? How does it promote inter-subjectivity, being-together, the encounter and the social construction of meaning?

Frankly, simply writing about that sort of approach does not seem to me to have changed some attitudes either.

Perhaps making a film with the intent of beginning to change hearts and minds is, ironically, a middle ground: an activity somewhere between ‘Shout it loud; I’m gay and proud!’ and tedious intellectual rhetoric published in unread journal articles.

Five years ago, I thought I would give it a try, anyway. This is when the scheming for the film, Rufus Stone, began.  Could we, through the use of film, both set to one side typical critical response to academic research and, instead use the outputs of that research to create a place for shared dialogue amongst the very citizens that the research is about?  By sharing stories, could we all warm up a bit around the communal campfire?

The personal irony of taking this ‘road less travelled’ has been that the process has made me somewhat more militant.  Much of my newfound exasperation with ignorance has been ignited by some of the responses to our proposed film, its story and (importantly academically) the findings from the in-depth research in which our script is grounded.

A tendency towards denial continues to astound me. Included in the storyline of Rufus Stone is a prevalence of suicide amongst older gay men, frequently reported in both our biographic interviews and a focus group as well as in the press.  When this is mentioned, a typical response is, “Well, that may be so for their generation, you know, older gays”.  I ask, “Why then is there an international campaign to raise awareness of the increase of suicides amongst gay youth?”  This fact is typically met with silence. (For example: 'Gay Buffalo Teen Commits Suicide ...')

The British do not like to seem to be complaining. Brits often will silently endure a poorly served restaurant meal rather than object to bad service.  Bring up a subject like gay rights, prejudice against gay and lesbian citizens often leading to isolation, even despair and harm amongst many older community members and the British penchant for avoiding awkward conversations goes into overdrive.  The dialogue typically goes something like this:

“I doubt that there are any in our village, anyway.  We hold traditional values in our community”.

“Well, we don’t care what these folks get up to exactly as long as they don’t do it around here”.

“We have grandchildren.  We need to protect our values for their sake”.

A phrase that is well over one hundred years old now is often repeated in these conversations as a response to calls for understanding and compassion towards gay and lesbian citizens. When a Victorian actor showed too much affection for the leading man, actress, Mrs. Patrick Campbell, replied: ‘My dear, I don't care what they do, so long as they don't do it in the street and frighten the horses’.  The fact that a Victorian attitude frozen in time is today seen as an ‘amusing’ response to an ‘uncomfortable’ conversation simply boggles the mind. ‘Traditional values’ such as tolerance and fair play seem to have no place in this version of community standards. The lark ascending, indeed.

That line, ‘We don’t care what you do as long as you don’t do it in the road and frighten the horses’ is included in the script of Rufus Stone. It is delivered in a speech excusing village attitudes, even making light of a plea for compassion.  In the next scene, the lead character discovers that his boyhood friend has just hung himself.  The point of this juxtapositioning in the storyline is to emphasise that what we say often does have consequences, often, serious ones.

Now for some good news. Between takes of the scene described above, I was waiting with some of the young crew, sheltering ourselves from a sudden shower behind a van packed with leads and sundry cinematic equipment.  The boom operator, Dan, fresh from film school with an unbridled enthusiasm for his role, factiously quizzed me.  “So Kip.  Are horses afraid of gay people?”

“It is less painful to learn in youth than to be ignorant in age”.
—Proverb

Watch the trailer for RUFUS STONE here,
and catch the filming of the final 'fire scene' here.
Background to the research and film production on RUFUS STONE blog.