Performative Social Science: What it is/What it isn't

A Seminar held at Bournemouth University on 13 October, 2010 presented my review of Performative Social Science (PSS) and a re-screening of one of my earlier audio/visual productions, 'The One about Princess Margaret'. 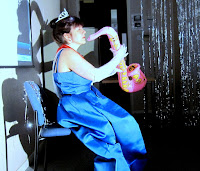 Actor/Director Sharon Muiruri, dressed as a Princess, greeted guests at the door royally with "How do you do?" and "Have you come far?" Bags of popcorn were waiting for audience members on each of their seats. The "Theme from Black Orpheus" played in the background and, at one point, Sharon sat down and pretended to play along to the sax solo on a toy saxophone.

My take on PSS then began as an audio recording. This was followed by the screening of 'The One about Princess Margaret'. The entire 50-minute production was pre-recorded as a Windows Media file, much as a Broadway or West End show is pre-programmed on computer. This amused me. I sat in the corner behind the computer, a bit like the Wizard of Oz.

This was accomplished in order to test some new ideas about presentation and audience, but also to expose, for the first time, my writing for my forthcoming (2011) Chapter, " Princess Margaret in Retrospect: the Story Behind a Short Film ", for a book entitled, Popularizing Research: Engaging New Media, Genres, and Audiences, edited by Phillip Vannini, to be published next year by Peter Lang Publishing.

The room was packed and an enjoyable time was had by all present. Listen to the audio recording, then watch the video below.

Audio Recording of
"PSS: What it is/What it isn't"

"The one about Princess Margaret"
Posted by Kip Jones at 09:10 No comments: