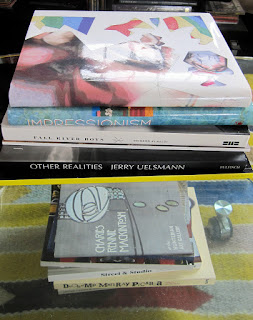 I have experimented over the past ten years or so with writing performatively, or rather, representing in text what I am trying to accomplish visually and aurally. Several examples are available on my webpage and include the results of an interview with Mary Gergen, the script for an A/V production about Klaus Riegel and Ken Gergen, the script for my Princess Margaret A/V and a very early piece about Akira Kurosawa and Gerotranscendence.

The Kurosawa presentation holds particular memories for me. I took a slow boat to Bergen, Norway to present it at a conference. It was mostly me rambling on about my idea that Kurosawa's main character was a fine representation of Tornstam's Theory of Gerotrancendence; I played clips from Kurosawa's film, Ran, (with sound) behind me whilst reading my paper (I seldom do this anymore, read directly to an audience, that is), trying to build a 'performative' montage of sorts.

Those were early days. The audience didn't seem to get it at all. No one would sit with me at lunch following the presentation. I should have known then that I was on to something.

I draw attention to these early attempts at writing performatively for several reasons.

First, I think it is important to revisit the initial motivations behind these early efforts and even try to recapture a bit of their naïveté and enthusiasm for finding new ways of expressing our scholarship. As my work becomes more sophisticated (even 'skillful'), it is important for me not to abandon such initial struggles and uncertainties which represent the creative part of the process.

What was involved in all of these early pieces was creative problem-solving --being presented with a particular puzzle or challenge and then finding the tools from the arts (using text as graphic illustration; mixed media including TV, overheads, audio, etc.; radio script writing; and film as background montage) to respond to such questions. This is what Performative Social Science is about and should be doing. I am often reminding myself and others of this fact.

I did not suddenly decide to turn myself into a graphic illustrator, script writer or filmmaker. I remain a social scientist with a particular story to tell or message to get across who is exploring which media would best help me to accomplish that. I don't worry about whether I am very good at the use of a particular medium but rather, wonder whether the medium will serve the purpose. I then begin the struggle with the particular new means of communicating. This process itself holds many of the joys and frustrations of each project, but also the opportunities to really explore the creative process.

I have mentioned recently that the 'writing up' of our projects should be ancillary to our work, not the main reason for doing it. For me, more interesting are the scripts themselves, the notes, the diagrammatic evidence that our projects leave behind as a kind of record. If we must publish, these would certainly hold more interest for me.

(I have a coffee table piled with beautiful books; I do love publications, especially ones with pictures! Illustrated above.)


Publish or perish drives much of academic life. It has its origins in hard science where the first to get his experiment, finding, theory, etc. into publication won. Other academic disciplines followed suit by imitating this system. It has developed both a 'style' of academic writing as well as a vetting process that are both by now antiquated and suspect.

Recently, I had an email from an academic who was exploring the performative and experimenting with the means available to him. The enthusiasm in his message was palpable and I expectantly opened the accompanying published paper that he had attached to his message. I was met with pages of dry 'scholarly' justifications for what he was trying to accomplish performatively, instead of anything I could really find inspirational or even helpful to the work of others.

We have all been caught up in this bind from time to time, me included. Fortunately, publication itself is being forced to change and more and more, multi-media is now often requested as part of the publication process. These changes are driven mostly by economics, but that doesn't mean that it isn't a good time to take advantage of the opening up of narrow prescriptions for publication of our work. Even 'tenure' requirements are beginning to include not just X number of published papers but also the possibility of outputs through alternative media. Funders are looking for outcomes from their investments in us and want to know how we will affect change in the wider world; i.e., the world beyond the very few other academics who happen to read a journal article. This time of flux should be seen as an opportunity to get our alternative responses to dissemination of social science data out there.

I enjoy writing here for this blog. It began as an experiment for me; once again, I started out not sure of what I was doing or how I would go about doing it. I was uncertain of the outcome as well.

One result for me is that I am less and less interested in writing that does not communicate more directly with an audience and include my 'self' in that process. All I really have to share with anyone else is my own experience. It may be flawed and/or of little value to anyone else. For these reasons, I try to find a way in which what I write here will be both of some usefulness to others in their own work, but also attempt to write it with some skill and craft at the same time.

PS Hope to see many of you at the Bournemouth Qualitative Conference in September! About one-third of it this time is performative!
Posted by Kip Jones at 07:45 2 comments: