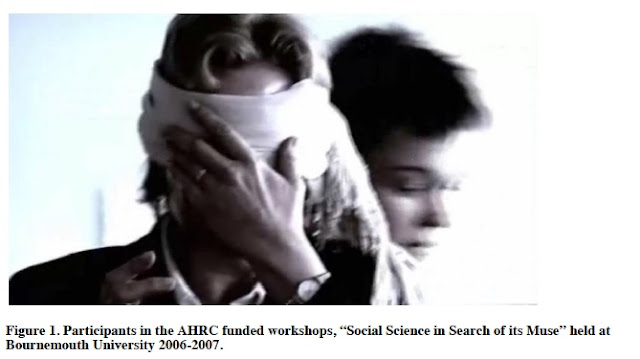 Performative Social Science (PSS) is an arts-led method of research and dissemination developed by Jones at Bournemouth University over ten years and is recognized internationally.
Recently lauded by Sage Publications, they described PSS as pioneering work that will ‘propel arts-led research forward’ and be a 'valued resource for students and researchers for years to come’.  --AHRC blog

Performative Social Science is positioned within the current era of cross-pollination from discipline to discipline. Practitioners from the Arts and Humanities look to the Social Sciences for fresh frameworks, whist Social Science practitioners explore the Arts for potential new tools for enquiry and dissemination.  Performative Social Science is defined and the similarities and differences between PSS and Arts-based Research (ABR) are delineated. The history of PSS is then outlined and its development, particularly at the Centre for Qualitative Research at Bournemouth University in the United Kingdom, is reviewed. Relational Aesthetics is then described in depth as the theoretical basis and grounding of Performative Social Science.
Relational Aesthetics (Bourriaud, 2002) offers a theoretical ground for the complexities of connections across seemingly disparate disciplines such as the Arts and Social Sciences and for further exploration of the synergies between both disciplines as well as communities beyond the academy. An example of a large, three-year nationally funded project, culminating with the production of an award-winning short biopic, RUFUS STONE, is outlined as a prime example of a multi-method approach to social science research which includes tools from the arts in its progress and outputs. The entry concludes with goals and aspirations for Performative Social Science in the future.