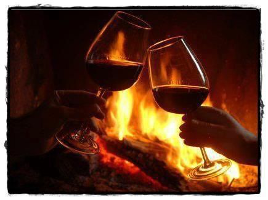 Sam was in one of his lighter moods. He had a drink or two upon arriving home so that helped.

I had planned a special dinner for us. We had watched Nigella prepare Veal Marsala on television and he seemed to show interest. He usually could care less about cooking programmes, but Nigella heaving her breasts in a chiffon blouse over a hot hob grabbed his attention. She taunted her viewers with the fact that, although veal isn’t very popular with the British, this recipe gives it a sense of foreign intrigue. She added that Marsala wine brings it the sexual frisson of a Sicilian wench crushing grapes between her toes. Sam was transfixed.
So Veal Marsala it was. And I could prepare it well ahead of time too. Minus the chiffon blouse of course.
Sam built a fire in the fireplace and mixed his favourite cocktails on his art deco mirrored bar. He normally had little to contribute to conversation, except when he was drinking. Then it was all about him. I would interject with “Oh, I saw Marjorie today” “Really, Janet?” but then he’d continue to rattle on, usually about his friends at the club.
We started our drinking session on the sofa in front of what was by then a blazing fire, our two large dogs on the rug in front of it.  He put on a Sam and Dave LP and his mood became even more agitated. I slipped in a Nat King Cole platter a bit later to calm his mood somewhat.
He had been drinking for several hours by now and was quite pissed. He was also quite amorous. Is that a word you still can use to describe a past-middle-age man groping his wife on a sofa?
We stumbled upstairs, Sam removing a piece of his clothing at each station, twirling it around his head and tossing it like a demented stripper. He literally fell into our bed on his back. I got in beside him and he immediately rolled over on top of me.  To say that what transpired next was routine would be being kind.
Then about halfway through, he stumbled out of the bed. “Jesus, Janet! I need a slash!” In a few minutes he returned from the ensuite and assumed his position until conclusion. At this point, any thrill, if there was any to begin with, had departed the bedroom.
I was up quite early the next morning. I let the dogs out to relieve themselves and began to tidy up the lounge. Sam had spilled a drink on the sofa and red wine on the rug, so cleaning potions were required. I went into the kitchen where the overcooked, uneaten Veal Marsala sat on the countertop. I threw it in the bin. I picked up the trail of Sam’s clothes from the night before and put them in the laundry basket.
Some enchanted evening at Sam and Janet’s.
Later, our gay son called and wanted to meet up with me for a coffee and a chat. He had recently come out to us and was now living what he called ‘a gay life’.
He and I met up at a trendy café; you know, flat whites made with soya milk.  We sat on highchairs at a small round table near a window.
“I know I said I’m gay, but I want you specially to know Mum” Justin continued, “I’m a bottom. Do you know what that means?”
“I think so Justin. Yes. It’s about your preferred sexual position, right?”
“Yes, Mum. But it’s also in a way a description of me and who I am”.
“Okay, Justin, I think I get it”.
What I wanted to say but couldn’t was, “Oh Justin don’t box yourself in so early in your young life. Your generation rejects so many of the binary choices we were forced to make in the past, why create this new one for yourself? Leave room for experimentation and exploration of other possibilities”.
And he would say, “Oh, Mum. How could you know anything about it?”
And I would reply, “Because, my son, I’ve been a bottom all of my life”.
Posted by Kip Jones at 09:56

Older Post Home
Subscribe to: Post Comments (Atom)
'Kip Jones brings the genre of what he calls performative social sciences forward with wide-ranging theoretical, academic, and artistic products in a various media that takes up how social scientists can use art for investigation and dissemination.'